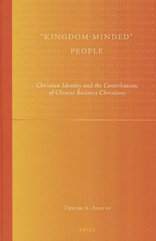 During the early twentieth century in China, a number of key economic leaders converted to Christianity. Whilst strongly influenced by cultural heritage, powerful modernizing forces and tumultuous political changes, the new Christian identity inculcated by Protestant missionaries motivated these entrepreneurs to modify their business practices, improve their social environment and extend the influence of Christianity. Protestant and Catholic sojourners likewise made significant contributions into their adopted communities. With unprecedented economic growth in China today, a fascinating contemporary parallel can be seen, particularly through the influence of Pentecostal, charismatic and evangelical training. Previous research has explored the emergence of the urban Christian life in modern China. However, this systematic study provides new understanding of how Christian identity motivates Chinese business Christians toward economic, social and religious contribution.

"Kingdom-Minded" People: Christian Identity and the Contributions of Chinese Business Christians is currently available for sponsorship.