From Pasture to Pastorate: The History of Morningside Uniting Church 1902-2002 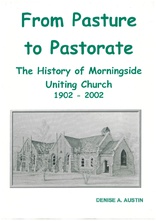 On 3 September 1894, the 'Cambus Wallace', on its maiden voyage from Scotland, wallowed under heavy south-east squalls and ran aground on Stradbroke Island, breaking into pieces and losing six crewmen. Out of the tragedy, the ship's bell was salvaged, to become a well known and much loved sound each Sunday morning, ringing from the tower of the Morningside Methodist Church (later Morningside Uniting Church), at Thynne Road, Morningside. The first bell-ringer, Ernie Crowther, would sound the call to morning worship across the open pastures, after he had trimmed the church's oil lamps. This book reveals that as the pastures gradually turned into modern suburbia, the church remained as a focal point for corporate, community worship. The birth of the church coincided with the formation of the new federal nation. The preamble to Australia's Constitution, written in 1901, stated: "Whereas the people of New South Wales, Victoria, South Australia, Western Australia, Queensland and Tasmania, humbly relying on the blessings of Almighty God, have agreed to unite in one indissoluble Federal Commonwealth." Within the community of Morningside, there lies a recurring example of this humble reliance, in the congregation of Morningside Uniting Church.

From Pasture to Pastorate: The History of Morningside Uniting Church 1902-2002 is currently available for sponsorship.