Alphacrucis College sessional lecturer in Australian Indigenous studies, Ps David Armstrong, founded One Good Day, in 2010, to help children and adults in tough circumstances with the opportunity to take a break, and have at least One Good Day. This time of refreshment with fun and fellowship can often lead to better times ahead and another good day. David realised that many of the existing “we have a program to fix your community” systems were not the real answer and the Aboriginal community were quick to respond with “we don't need you to tell us what to do.”

David had a heart to work with rather than attempting to control the community. One day he borrowed a friend's jumping castle and he quickly began to see how much fun the kids were having which inspired him to look further at what would make the kids happy. He then decided to take some of the kids out for a day and took them down to the beach. The kids were happy and laughing and were well behaved. Along with the parents who came with the kids, they all showed signs that even though many were in the midst of tough times at home, going out for a day gave them enough of a break away that had a lasting positive effect.

For many of the kids and families this type of opportunity to have a day at the beach would not have been possible or even something they would have hoped to do. The interesting observation in terms of mental health was that it did not take much to restore what was naturally inside the kids prior to all the family problems.

Another key activity is the Mt Druitt Indigenous Choir where children of all ages perform in many different locations around Australia singing not only in English but also in Dharug – the native Aboriginal language of the Sydney region. The choir is conducted by family members so they are seen by the children and community. With fundraising, One Good Day pays for singing and Indigenous language teachers.  Other support people drive the bus, play the guitar and write songs. 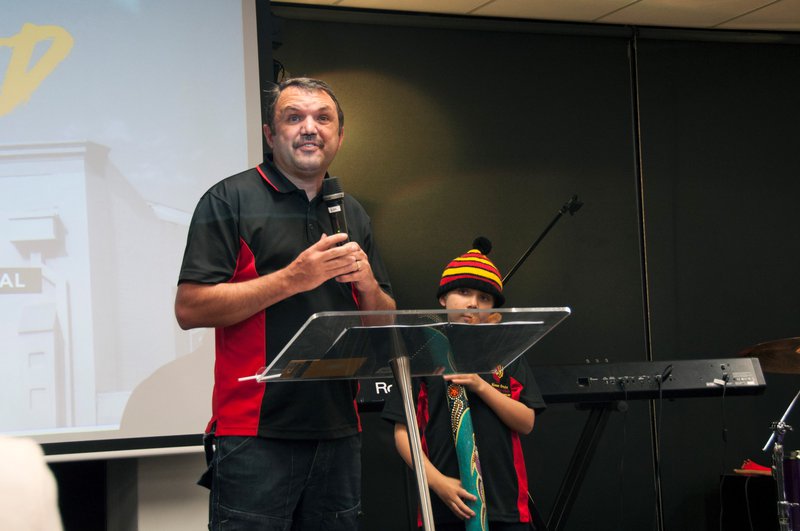 Children involved in the One Good Day initiatives must have a parent/s with them who is responsible for the child. This has a twofold effect – the family at both ends needs to work out a way to get along in a healthy manner and it is restoring back to the culture that families are important which is effecting the mental health of the whole community.

The Mt Druitt Indigenous Choir has become so popular that they have sung over 150 times around Australia. This includes the 2014 Graduation of Aboriginal Health Workers at the Aboriginal Health College, NAIDOC Week 2014 Mental Health Commission of NSW, Blacktown Arts Centre Aboriginal Conference and St Ives Show.

Over 50 families each week are also given extra food and now some of the parents have taken part in Work for The Dole Programs assisting the administration of the Choir. One Good Day is not about building a large organisation to promote itself – it's simply a facilitator to help individuals and families who may have felt hopeless to have hope, and in the long term as their slogan states – achieving the dream.

There are many stories about the impact Mt Druitt Indigenous Choir and Nulawala Inc in the lives of individuals, partner organisations and the wider community:

Carmon Cordoroy from Centrelink (Human Services) said that the Choir’s performance was the “best ever” NAIDOC Event and invited us back the second year in a row.

Commenting on the choir’s appearance at St Ives Show, Elaine Tracey, President of the Northern Suburbs Agricultural and Horticultural, Society Inc and organiser of the event says: “We’re were excited when we learned the Indigenous Choir was coming to our show because we knew of their talent and popularity. Our local Northern Sydney Councils including North Sydney, Lane Cove, Willoughby, Warringah, Manly, Pittwater, Ku-ring-gai and Ryde have funded the establishment of the Aboriginal Heritage Office and the employment of an Aboriginal Heritage Manager and Aboriginal Heritage Officers and we were delighted to be able to provide the members of Mt Druitt Indigenous Choir with a chance to enjoy one very special day at St Ives Show.

Elizabeth Story, Senior Communications Advisor, External Relations, Mental Health Commission of NSW, writes in 2014: “I think what you are doing is so empowering for the Mt Druitt children and their families, but also for Aboriginal and Torres Strait Islander people across Australia.  Thank you again on behalf of everyone here at the Commission for giving us such an uplifting performance for NAIDOC week.”

Terry Smith, Manager of Education and Training, Aboriginal Health College, states: “We were very pleased to host the Mt Druitt Indigenous Choir for our 2013 graduation ceremony. Their touching performance brought much happiness and many smiles to the faces of our diverse audience – which is why we are pleased to be hosting them again for this year’s graduation!”

Simon Crean former Minister for the Arts "It is wonderful to hear about the Mt Druitt Choir and its performances at various events across NSW & Qld providing the children with opportunities to share knowledge stories and culture across groups and between Indigenous and non-Indigenous Australians."

Blacktown Arts Centre, Flushcombe Rd, Blacktown City Centre "This was a wonderful rehearsal and opportunity to use the space at the arts centre and to join with members of Butucarbin Drama Group"  "The Governor General was in the audience at the rehearsal as well as Indigenous elders at the performance.  The Choir sang so beautifully and then joined Aunty Margaret at the end in a display of respect  BCC NAIDOC FESTIVAL, Nurragingy Reserve, Doonside. "It was great weather and Great food and 20 members of the Choir took to the stage to sing Dreaming and an adapted version of From little things big things grow" " (David Armstrong, July 2011).

Luke Elias “We really enjoyed their performance, there is something about the voice of a child that is just compelling to listen to. Although I could not understand the lyrical content, it did not matter in the slightest. I asked one of the young performers what they were singing about, she knew one song was about an emu.”  A/Physiotherapy Department Head, Blacktown Mount Druitt Hospital | WSLHD.

Dr Andrew Godden “Indigenous Children's Choir Rocks the Caves….. The powerful drone of the didgeridoos seemed to fill the Grand Arch, and surround the happy voices and rhythmic clap sticks of the Indigenous Children's Choir at Jenolan Caves on Saturday. The Choir comprises children from Western Sydney aged from three to fourteen, who were on a weekend visit to the district hosted by the Oberon Christian Life Centre and the Jenolan Caves Trust. In the Devil's Coach House their singing echoed and swelled to fill the vast cavern, leaving lingering memories of enthusiastic faces and their joyful worship songs. They then toured the Lucas Cave where they also sang in the Cathedral, with some of their songs in the Dharuk language which is rarely heard any more. They were excited to see a platypus in the Blue Lake and the big lizards in the waterfall near the guides office.

“Thank you so much for agreeing to have your choir perform at our Aftercare Mental Health Event on Wed 24 Oct at Dawson Mall.  Having seen the choir perform at NAIDOC we are very excited to have the children perform at this event.” Dayna Groppenbacher Aftercare | Team Leader Personal Helpers & Mentors (Blacktown), 2012.

Lane Cove Council  “Thank you for putting on a great show, and it was wonderful to meet you and your mob last Saturday. The performances were beautiful, and moving - all of the choral pieces and Aunty’s solo too. Thank you for being part of our Festival” Jane Grimley Assistant Cultural Development Officer Lane Cove Council, 2012.