This year we celebrate the founding of Alphacrucis College, inaugurated as Commonwealth Bible College in the spirit of the newly formed Assemblies of God of Australia’s ‘Harvest Vision’, 70 years ago. CBC emerged from the urgent request of a group of faithful young people who, in 1947 were encouraged to leave an interdenominational college due to their Pentecostal distinctives. That same year, Pastor Charles Greenwood of Melbourne’s Richmond Temple established an annual Pentecostal camp at “Beulah Heights.” A visionary and supporter of the students’ appeal, Greenwood provided momentum behind the decision to establish an AGA Bible college, and appointed American evangelist Rev. Frank Sturgeon and his wife, Inez, leaders. Subsequently, CBC was inaugurated at Richmond Temple, on the evening of 14 February 1948. The physical grandeur and evangelistic rigour of Richmond Temple provided a perfect setting for the one thousand who gathered to profess their support of the new national college. In a great symbolic act of the communal vision shared by all, the inaugural student class marched down the aisle, embodying their calling as the pioneer “Van Couriers” of this new chapter in the history of Australian Pentecostalism. As we reflect upon Alphacrucis College’s origins, we draw on the words of the first Van Couriers, “thank you to Pastor C.L. Greenwood and the board of Richmond Temple who kindly allowed us to use Richmond Temple as our College.”

70 years later, the college continues to see significant progress and growth as it strives ahead in its various endeavours. Not least includes the growth of the Australasian Pentecostal Studies Centre and a movement-wide flourishing of enthusiasm for our Pentecostal history. One of the three Research Centres of the College, the APSC is a vital part of the College’s research profile and thus, every effort is made to ensure that it facilitates student engagement and contributes to a healthy and exciting research culture at the College. It is also noteworthy that the College’s 70 year anniversary celebrations have provided special opportunities for the APSC to showcase its valuable collection. 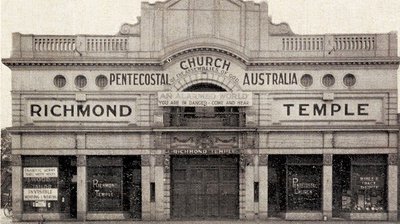 Richmond Temple - home of the inauguration and first student body of the Commonwealth Bible College in 1948 before the College moved to New Farm, Brisbane.

The digitisation project is making steady progress at the Centre, particularly on account of our new archive assistant, Jess Austin. Jess is currently making her way through the research collection donated by Barry Chant (renowned historian, theologian and minister within the AoG church) comprising bibliographic information, sermon notes and general research material used in his research endeavours on the history of Australian Pentecostalism. Material from other collections, particularly those of a more fragile nature, are also being prioritised in this ongoing digitisation project.

Two Super-8mm film reels, including footage of the flood waters that devastated the Graceville campus of the Commonwealth Bible College in 1974, and a promotion of the Katoomba Campus that became home to the relocating College, are being digitised by a company in North Sydney who specialize in digital transfers. Footage of the Brisbane river flood waters engulfing the campus and the extensive clean-up operation to follow, was captured by student and later church-planter, David O’Keefe.

The resulting flood-footage was aired in Pentecostal assemblies far and wide attracting funds exceeding $50, 000. While the initial expectation was that the funds would go toward the restoration of the waterlogged building complex, this vision quickly subsided, as with the foundations of the very building complex itself. The realisation of the increasingly material need to relocate the College was setting in faster than any other possible alternative and thus, Principal Aaron Morgan proactively looked for promising new beginnings. He was quickly allured by the prospect of moving to a cheaper, out-city locality in New South Wales and after a few knockbacks, settled with the Palais Royale situated in the heart of the Blue Mountains. Despite the unequalled setback of losing the Graceville campus, so faithfully built by the hands of those whom ate, learned and prayed within its fold, the Palais Royale provided a new space and opportunity for renewal and growth.

The staff at the APSC await expectantly to see the vison of these two momentous historical chapters unfold in their new digital format. As noted in the previous newsletter, last year the company digitised two silent 16mm film reels illustrating some of the earliest years in the life of the Commonwealth Bible College and the Sturgeon Campaigns based in and around Parkes, NSW and were aired at AC's staff camp in January this year.

A few weeks ago, I visited Barry Chant and his wife, Vanessa, to pick up 19 boxes containing sermon notes, pamphlets and bibliographic materials. To my excitement, a particular box contained some of the earliest Pentecostal materials to exist in Australia, including a letter written by Sarah “Jeannie” Jane Lancaster - the ‘founder’ of the Pentecostal Church in Australia, by virtue of her establishing The Good News Hall in 1909– the first organised Pentecostal assembly in the country. The letter is addressed to Lancaster’s friend, Leila Mullin who was seemingly experiencing ‘divisions in the Church.’ Drawing from the words of Paul, and offering words of encouragement Lancaster writes, “Oh Leila dear, the time is growing so short that God has to let the testings come rather quickly but we are going in for the prize, are we not? And let us say with the Apostle, “I reckon that the sufferings of this present time are not worthy to be compared with the glories that shall be revealed in us.”  This deeply pastoral, personal and scripturally grounded piece of writing is one of the most historically evocative materials in the collection. It is a precious insight into the mind of organised Pentecostalism’s first leader, the theological vision that undergirded her ministry and elements of the historical cultural context that characterised the early Pentecostal church.

Other recent donations include: 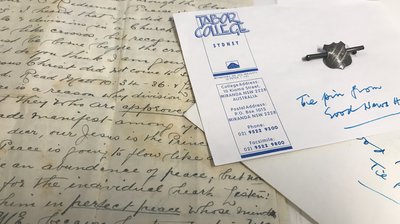 One of the chief goals of the Australasian Pentecostal Studies Centre, in addition to preserving the Pentecostal and Charismatic heritage of Australasia, is to promote and facilitate research and scholarship within the field of Pentecostal studies – hence its operation as a ‘studies centre’ in addition to its operation as an archive. As such, in addition to the Web Journals database, part of the collection has been catalogued on eHive – an online cataloguing and publishing platform for archives, museums, heritage collections and everything in-between! To-date, a small portion of the APSC collection has been published on this platform. This web-based software not only provides a database for cataloguing the collection, thereby meeting industry-standards for collection management, but facilitates research activity by providing a ‘front door’ to our collection. If you would like to have a look at the online collection, still in its initial stages, please visit;

On February 14, the College celebrated 70 years since its inauguration in 1948. The history of the college was narrated through a small decade-by-decade exhibition exploring student life, college events and vision. Four banners exhibited text and an image that epitomised each decade during the College and tied together the table displays which had assortments of student magazines, photographs and relevant paraphernalia. 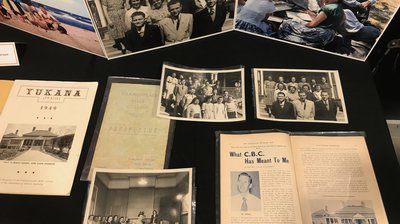 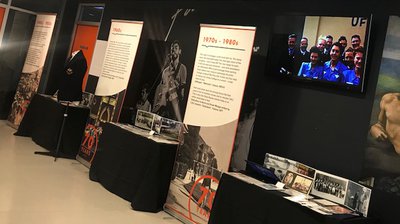 Furthermore, the APSC worked in partnership with the marketing department to produce a plaque which acknowledges the strong historical partnership between Bridge Street Church (originally, Richmond Temple where the College was inaugurated and located for a short while before its move to New Farm) and Alphacrucis College. It tells the story of the birth of the College and was presented by Prof. Stephen Fogarty to Pastor David Doery, Senior Pastor of Bridge Church in April this year.

We’d love to see our collection grow! If you have items you’d like to donate please email our archivist ingrid.ryan@ac.edu.au or call (02) 8893 4715.