The Flight from God 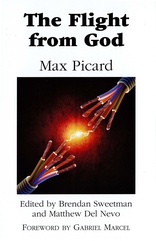 Max Picard (1888–1965) was a Swiss-German writer, who converted to Catholicism from Judaism. A doctor and psychologist, Picard worked in Berlin but retired in the 1920s to Switzerland. He is often regarded as a “wisdom thinker,” and his rich and penetrating writings continue to speak to us in the twenty-first century. The Flight from God is an incisive, profound description of many of the problems facing modern culture, and its analysis resonates with us more today than when first published in 1934. Picard illustrates that modern culture is essentially in Flight, and so the individual is under pressure to make a choice; in earlier generations only an individual could be in flight because the culture itself was not in flight but in Faith.

Picard demonstrates how the flight is the space between man and God, how it can be adopted as an attitude toward life by the individual, and how it is allied with moral relativism. The flight does not require courage or guilt; yet it is to be found in, and is often destructive of, many facets of life including human relationships, art, economics, science, entertainment, even religion. Because of this it leaves many in anguish, from which we seek alternative avenues of structure and meaning. Yet, in every person there is a residue that will not yield itself to the flight, and this is bound up with love, which reminds us of God. Picard shows how God is always somehow present in the flight—just when we think we are arriving from the flight, we find that God is already there. Picard’s identification and discussion of the roots of the distresses of modern culture, and its attempts to grapple with the spiritual dimension of human experience, along with tensions created by freedom and individuality, are clearly still of the greatest relevance for us today.

By reissuing this thoughtful work (the first of a series by this author) for a new generation of readers, St Augustine’s Press is pleased to add Picard’s unique voice to an important contemporary discussion. It will appeal to all those with an interest in matters of faith and culture, freedom and democracy, philosophy, theology, art, literature, spirituality, belief and unbelief.

The Flight from God is currently available for sponsorship.